Home About Products Services Research Join Us HR Login Test Yourself FAQ Contact Site Map
jobEQ's headquarters is located at The Convent in the town of Eeklo in northern Belgium. Some of the training and meetings that jobEQ participates in takes place at The Convent, and this page is designed to show you several ways to get there. Some people come directly to The Convent by car or train, while others choose to stay in town for a night. If you choose to stay in the area for a night, you can either stay in the few hotels in Eeklo or you can find a place in Ghent, a nearby city with a nice atmosphere and plently of hotels.

Lodging recommendations in Eeklo and Ghent

By Train (from Brussels)

By Train (from Ghent)

Ghent is the closest major city to Eeklo. Trains take about 35 minutes to get from the Ghent Sint-Pieters station to Eeklo, and on weekdays they usually leave at 42 past the hour. A ticket will cost about 3.90 Euro. Leaving from Sint Pieters station, Eeklo is usually the last of 7 stops, right after Waarschoot. For an exact schedule, click here and type "Gent St Pieters" as your starting point and "Eeklo" as your destination.

By Car (from Brussels or Gent)

By Car (from Calais)

Calais is the city in northern France that serves as the closest landing point from England and the exit of the Chunnel. It's about 150 kilometers from Calais to Eeklo. Expect 80-100 minutes to get there, depending on your driving speed.

More information about accomodation in the area
Back to Contact jobEQ 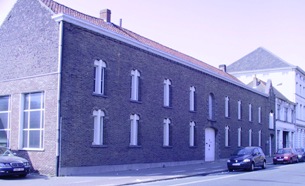